The Future Of Electric Car Design

Swedish car-maker Volvo is working on new ways of solving key problems with today’s design of electric cars. In addition to taking advantage of newly discovered materials and manufacturing processes, Volvo is not afraid to introduce radical changes to the current automobile design.

A technology Volvo is developing gives us some insight into the future of electric cars – while it’s easy to focus on their disadvantages today, new materials will bring much more advanced vehicles in the future.

Since the battery is mainly what’s holding electric vehicles back – including trucks and buses – that’s what researchers are focused on. Big and bulky, it takes a lot of battery to compete on range with conventional cars, and it’s even more challenging to achieve that at a reasonable price. And battery manufacturing is a pretty toxic affair.

Volvo sees a way to eliminate the battery by using a car’s body panels as a source of power.

First, it builds a car’s body panels out of lightweight (but very strong) carbon fiber. Then it infuses nano-sized batteries and super-capacitors into the panels. 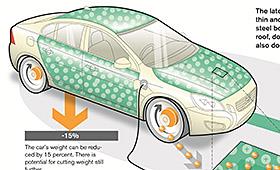 This electrified skin charges faster than conventional batteries, and refreshes the charge as you drive through regenerative braking. It can still be plugged in to get a full charge, and results in a car that’s 15% lighter and cost-effective to produce with about a 80-mile range, says Volvo.

Volvo has been working on the technology for over three years with other European tech companies at Imperial College, the site of other energy storage research. It’s also useful for conventional cars – it can eliminate the need for the battery used in start/stop engine technology.

Another innovative Volvo technology is “I-See” software which cuts fuel consumption in trucks, basically by running them on auto-pilot.

The company is considered one of the top 3 sustainable brands by Swedish citizens.

Posted by Buzz1, one of our dedicated staff members!
Previous Can Quantum Physics Prove That Death is Only An Illusion?
Next Pomegranate – A Super Food

Can Quantum Physics Prove That Death is Only An Illusion?

With the help of Italian conservation organization Oikos, a rural village in Tanzania has embraced …